I meant to write this post earlier, but better late than never!

Here are the results from my first Methods Character Poll. I don't know if saying "votes" is really accurate for this kind of data, but I'm not sure what else to call it. 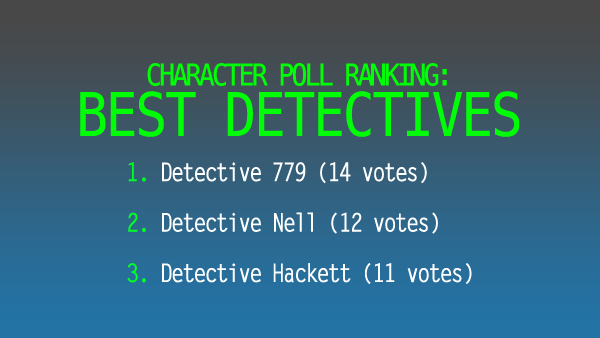 The best detectives were:

I'm pleasantly surprised that people like Nell that much. I'm glad I chose her to be one of the novel's protagonists! (Or perhaps that's why she scored so high, hmmmm...)

779 coming in first does not surprise me much, he's a pretty memorable detective. 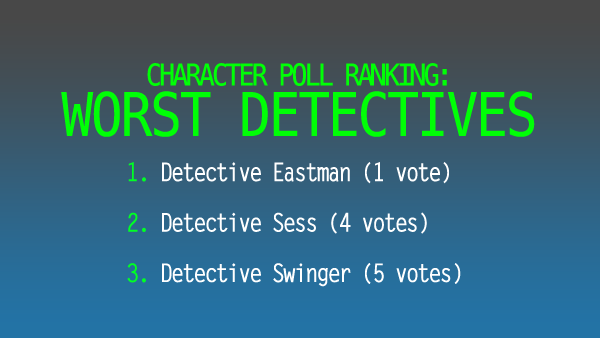 The top worst detectives were:

Well, that's not much of a shock! Eastman, is, obviously meant to be despised. The only slightly surprising thing here is that Detective Swinger wound up here, but I'm not sure that's really his fault, perhaps just the luck of the draw. 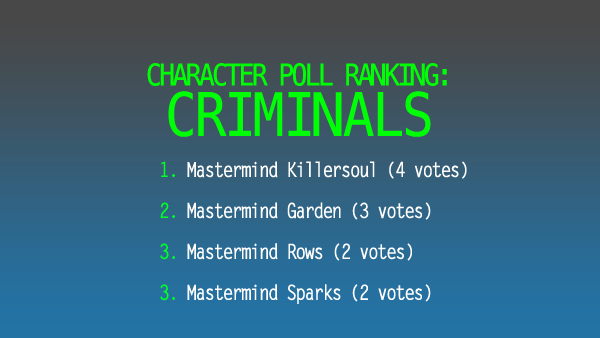 The criminals were ranked:

Not a lot of criminals introduced yet, so there'll be more data in the future... 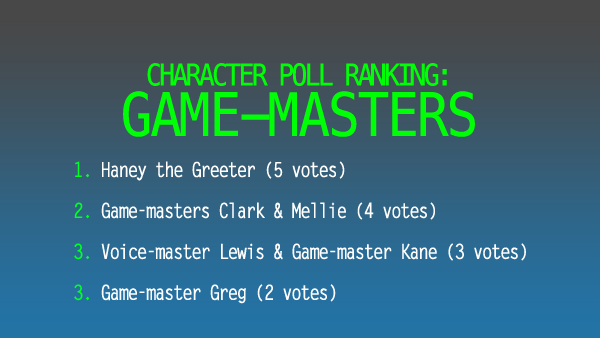 Finally, the Game-masters! (This poll was released before I introduced Game-master Conver)

Oof, Greg's down there at the bottom. That's tough for one of the protagonists of the novel -- but he sure is boring (intentionally -- I assure you)!

Conducting this poll ended up being pretty useful. For the most part, the characters that were ranked highest are the ones I'm focusing on the most anyway, which is great. Though I do wonder if the initial order that the rankings were in biased the results at all. I wish there was a way to randomize the order for every person who takes the poll, but I don't think that's an option.

The next time I run this poll will probably be about Chapter 50 or so. In the third stage a lot of new characters pop up. However, I have a few other polls in mind, and I'm planning on launching a new one over the weekend, so keep an eye out for that.

And please make sure to vote in the polls, because, as an excellent detective once said: "Data! Data! Data! I can't make bricks without clay."

The new release will be out sometime tomorrow (probably late in the day).

NooOooooOoo, Mastermind Garden! I FAILED YOU - But I mean, it's all right. Killersoul is the best, so I'll take the loss with dignity. I'm actually shocked that nobody else voted Eastman, and so many people voted for Swinger and Sess, but... C'est la vie.

Thanks for sharing the results with us - I've got a feeling there are people who struggled with who to rank at the bottom, like I did, so do take that into account. Looking forward to voting again next the poll comes around.